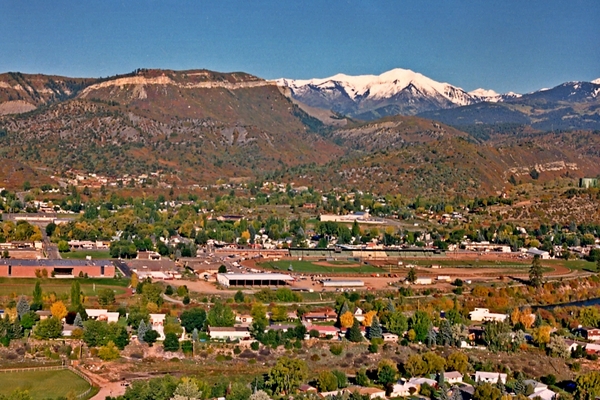 Durango is one of the few towns on the Western Slope that was organized by a railroad.  Named after Durango, Mexico, the Denver and Rio Grande Rail Road organized Durango on the Animas River in 1880. The goal was to have a rail hub that would service the booming mining area of Silverton, located up river deep in the heart of the San Juan Mountains. The rail line was completed in 1882, with a narrow gauge (three feet) running up the Animas River Valley for 45.2 miles to Silverton. This line has run continuously since 1882 with steam locomotives. Durango is truly a “rail town.”

In the last half of the twentieth century, Durango grew into the commercial and recreation hub of the Southern San Juan Mountains. The economic boom after the second world war brought the founding of Fort Lewis College, beginning as a two year agriculture school, today is now a four year institution. Growth in the ski industry impacted Durango in 1965 with the establishment of the Purgatory Ski Area, located north on Highway 550. Today, this slice of the Southern San Juans is an outdoor mecca for hiking, mountain climbing, skiing, mountain biking, hunting, paddling, snowmobiling, and fishing.