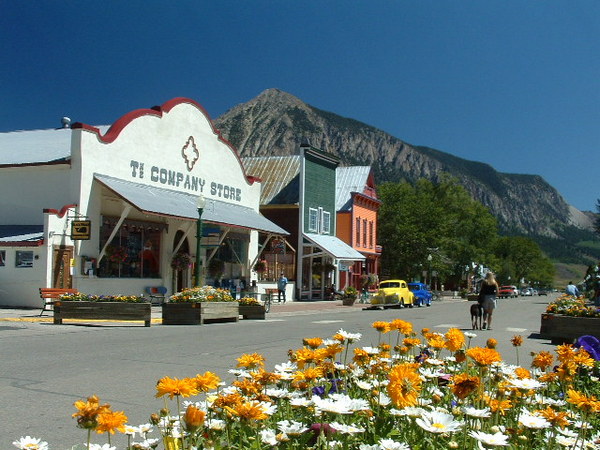 Crested Butte, named for the towering butte just south of town in the East River Valley.

Ferdinand Hayden roamed the Gunnison area in the 1873-74, wandering up the Gunnison River and East River basins. Whilst climbing Teocalli Peal, 13,320 feet, Hayden saw two mountain tops in the distance that resembled the crests of helmets. The “Crested Buttes” were Gothic Peak and Crested Butte. It was in 1878 that Howard F. Smith of Leadville wandered up the East River and found coal deposits in the Crested Butte area. His base of operations was the confluence of the Slate River and Coal Creek. Smith built a sawmill and smelter to service the mining camps in the area, and on July 3, 1880, Crested Butte was incorporated, with a population of about 400. The economic base in the beginning of Crested Butte was as a service center for the surrounding mining camps of Gothic, Irwin, Pittsburgh, Crystal, and Schofield. Smith quickly sold half his interest in the town to William Jackson Palmer of the Denver & Rio Grande Railroad. Palmer brought the line up from Gunnison in 1881, giving Crested Butte land transportation to assist in supplying goods and services for the local mining interests. Within a short time, Crested Butte’s population had mushroomed to 1,000, with five hotels, three livery stables, a dozen restaurants and saloons, sawmills, doctors, lawyers, and a church. With Smith’s sale of his coal land to the precursor of the Colorado Fuel and Iron Company it was a short while and coal became king in the upper valley. Both the hard anthracite and soft coal were found in abundance in Crested Butte.

The Big Mine provided an economic base when silver collapsed in 1893, producing 1,000 tons of coal per day by 1902. The Big Mine became the third largest mine in Colorado, with the high grade anthracite of any mine here in Colorado. The Big Mine finally closed in 1952, when CF & I found less expensive coal in Fremont County near its steel mills in Pueblo.