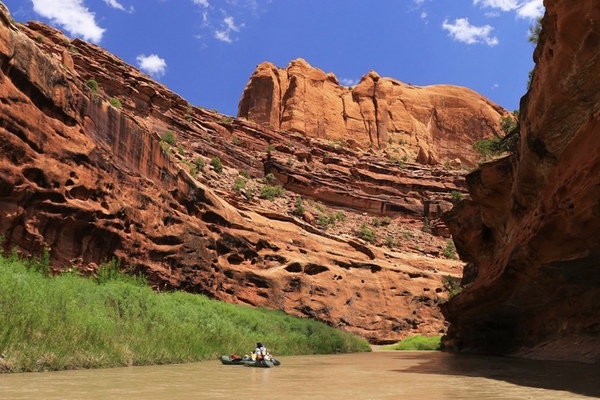 The Dolores River drains a rugged and semi-arid region of southwest Colorado starting in the southern San Juan Mountains.  In 1765, the Juan Rivera expedition discovered the Dolores (El Rio de Nuestra Senora de Dolores- Our Lady of Sorrows River) River while looking for a route deep into the Ute Indian Country of the Great Basin.  Finding the big bend of the Dolores, Rivera was able to ford and head northwest eventually ending in the Uncompahgre Valley below the present city of Delta.  The Dolores River headwaters are found near the top of Lizard Head Pass in the San Juan National Forest.  Just below the town of Dolores is the McPhee Reservoir which diverts and stores water for local agriculture.  Below the Reservoir is the Dolores River Canyon, stretching for over 40 miles, and averaging over 1,100 feet of depth.  Flowing northwest, the Dolores merges with the San Miguel River below the Paradox Valley, continuing northwest to meet the Colorado River in Mesa County.

The Dolores River discharges from the McPhee Reservoir are steeped in conflict. The BLM opperates the Reservoir on a “fill, then spill” policy, which results in low river flows for boaters, anglers, and river stake holders.