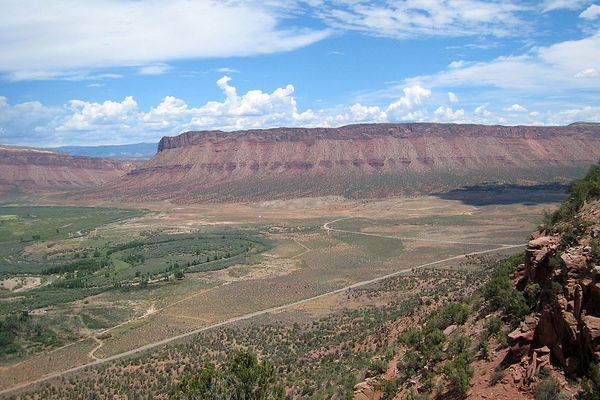 Montrose County can be divided into two sections, the more populated eastern section comprising the Uncompahgre Valley, and the less populated West End which consists of high mesas and sweeping valleys of high desert.

Nucla has it’s roots in the Utopian Movement of the 19th century. Established in 1884 by the Colorado Co-operative Company as a communal settlement in Montrose County. The largest single project of the colony was the building of an irrigation ditch, which was finally completed in the early years of the 20th Century. Several years later the town of Nucla was founded, with the irrigation ditch being the last vestiges of it’s communal foundation.

Naturita, located just five miles from Nucla, was founded by cattle ranchers. Situated in the San Miguel River Canyon, below Nucla, Naturita was to have it’s future cast in mining.  Copper and carnotite (the soft yellow ore from which uranium is processed) was first mined in the Paradox and Gypsum Valleys of the West End.

The Bedrock townsite was established in 1883 in the Paradox Valley just west of Naturita. Built on solid rock, the post office was opened on November 8, 1883. The valley was named for the course of the Dolores River, which enters through a narrow gap, then travels across the valley floor, and exiting through a canyon on the far side, creating a “paradox.”

Mining began as early as 1881 by the Talbert Brothers who sank a shaft into the yellow ore on their quest for gold. Gold was never discovered, however this yellow ore yielded a high level of uranium. The quality of the ore was excellent, making this area of Western Colorado account for the majority of world uranium between 1898 and 1928. Mining provided the growth of the towns of Nucla, Bedrock, and Naturita. Vandium mining commenced in 1915, lasting into the end of the 1940’s, and was used as an alloy in the production of steel products. With the late 20th Century drop in the price of uranium, the mining and milling industries gave way to agriculture as the economic foundation of the West End. Currently there is interest in returning to the mining and milling with the proposal of the Pinon Ridge Mill.  If approved, the mill would become the first uranium mill constructed in the United States in many decades.

Today the West End is a magnet for outdoor activity, with fishing, hunting, mountain bike riding, jeeping, off road vehicle riding and camping as an important segment of local economic activity.