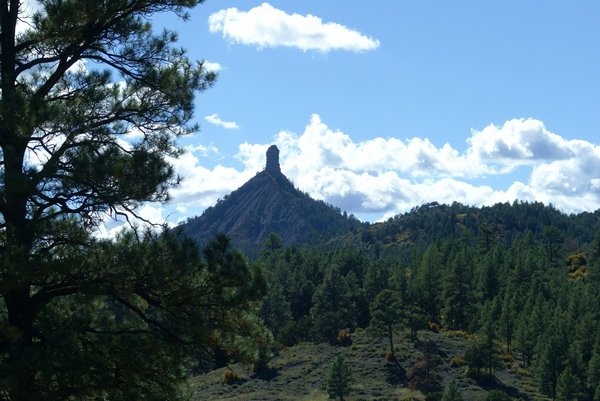 Chimney Rock’s twin spires served as landmarks for both the Ancestral Puebloans and the Spanish who settled New Mexico in the 16th Centruy, CE. Four structures have been excavated, including a 44 foot diameter Great Kiva, the Pit House, a multi-room dwelling, and a Chacoan Great House Pueblo. Chimney Rock was a Pueblo II Community (900-1150 CE), some 70 miles away from the Chaco Canyon Area. Building construction techniques imitated the style and architectural features of Chaco buildings including Great Houses and Great Kivas. The Great House Pueblo has been dated from 1076 to 1093 CE, has 36 rooms and two kivas, with building material coming from the valley below. Both Chimney Rock Pueblo and the Lowry Ruin Pueblo are examples of Chaco Style architecture here in Colorado.se

Sesonal hours, open from May 15 until September 30 each year. Located 17 miles west of Pagosa Springs, and 40 miles east of Durango, the Monument is surrounded by the Southern Ute Indian Reservation.

It should be noted there is no Visitors Center or camping area within the National Monument.